With the University of Cologne’s participation, a telescope is being built at an altitude of 5,600 metres in the Chilean Atacama Desert / the high altitude and the extremely dry air create observation conditions of unique quality 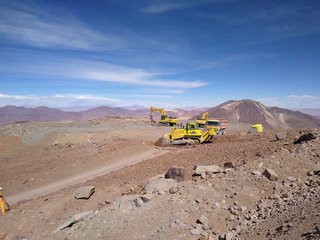 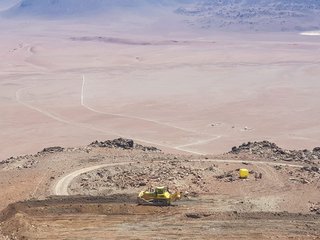 The construction of the CCAT-prima telescope on the 5,600-metre-high Cerro Chajnantor in Chile has started. Blasting has removed some rocks, and bulldozers are levelling the site for the telescope. The foundation will then be poured in two months. The first telescope parts to be installed in the foundation are already on their way to Chile. The telescope is being built jointly by Cornell University (Ithaca, New York), a German consortium consisting of the Universities of Cologne and Bonn as well as the Max Planck Institute for Astrophysics in Garching, and a Canadian consortium of eight universities. It will begin astronomical operations in late 2022.
CCAT-prime, together with the Japanese infrared telescope TAO (University of Tokyo Atacama Observatory), also under construction on Cerro Chajnator, is the highest telescope in the world. The high altitude and the extremely dry air in the Atacama Desert provide excellent observing conditions.

The University of Cologne develops one of the two ‘first-light’ instruments for CCAT-prime, the CHAI (CCAT Heterodyne Array Instrument) receiver, which simultaneously acquires spectra with 64 pixels on the sky, enabling extremely efficient large-scale mapping of interstellar clouds in the Milky Way and nearby galaxies. A second instrument, built at Cornell University and involving Canadian institutes, will make cosmological observations.
The evolution of galaxies over the history of the universe, driven by star formation, is the central scientific theme of CCAT-prime. On the German side, the project was largely funded by the German Research Foundation (DFG) in the framework of the Funding for Major Instrumentation as well as Collaborative Research Centre 956 ‘Conditions and Effects of Star Formation – Astrophysics, Instrumentation and Laboratory Research’.

The COVID-19 pandemic delayed the start of construction in Chile as well as the assembly of the telescope by several months. The telescope will first be fully assembled and tested in Germany before being disassembled into several large blocks for transport to Chile. It will then be re-assembled and commissioned in Chile at 5,600 metres altitude.

Video of the Blasting:
https://www.youtube.com/watch?v=O6zKVo_8KmA