Writing in Nature, Cologne scientists present important new findings regarding the origin of oceans and life on Earth. Measurements on the oldest preserved mantle rocks from Greenland show that – contrary to previous assumptions – the elements necessary for the evolution of life were not delivered to Earth until very late in the planet’s formation. 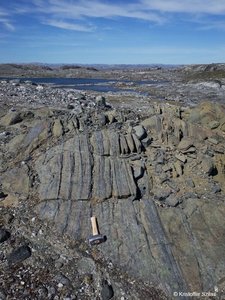 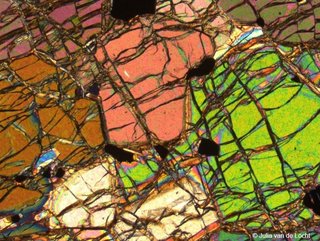 Thin section of the 3,8 billion-year-old mantle rock from southwestern Greenland. The rock is composed mainly of the mineral olivine. These oldest preserved mantle rocks of the Earth provide new evidence that water and other elements necessary for life, like carbon and nitrogen, were only supplied to Earth very late. Foto: Julia van de Löcht

Spearheaded by earth scientists of the University of Cologne, an international team of geologists has found evidence that a large proportion of the elements that are important for the formation of oceans and life, such as water, carbon and nitrogen, were delivered to Earth very late in its history. Previously, many scientists believed that these elements were already present when the Earth began to form. However, geological investigations have now shown that most of the water in fact was only delivered to Earth when its formation was almost complete.

The new findings, which are a result of collaboration among scientists from Germany, Denmark, Wales, Australia and Japan, will be published in Nature under the title ‘Ruthenium isotope vestige of Earth’s pre-late veneer mantle preserved in Archean rocks’ on 11 March 2020.

It is a generally accepted fact that volatile elements such as water originate from asteroids, the ‘planetary building blocks’ that formed in the outer solar system. However, there is ongoing discussion among experts as to when precisely they came to Earth. ‘We have now been able to narrow down the timeframe much more precisely’, said first author Dr. Mario Fischer-Gödde from the Institute of Geology and Mineralogy at the University of Cologne. ‘To do so, we compared the composition of the oldest, approximately 3.8 billion-year-old mantle rocks from the Archean Eon with the composition of the asteroids from which they may have formed, and with the present-day composition of the Earth’s mantle.’

To constrain the delivery of the so-called ‘volatile’ elements to Earth, the researchers measured the isotope abundances of a very rare platinum metal called ruthenium, which was already present in Earth’s mantle by Archean time. Like a genetic fingerprint, this rare platinum metal is an indicator for the late growth phase of the Earth. ‘Platinum group metals like ruthenium have an extremely high tendency to combine with iron. Therefore, when the Earth formed all ruthenium must have been completely sequestered into the Earth’s metallic core’, said Fischer-Gödde.

Professor Dr. Carsten Münker added: ‘If we still find traces of the rare platinum metals in the Earth’s mantle, we can assume that they were only added after the formation of the core was completed. They were certainly added during later collisions of the Earth with asteroids or smaller protoplanets, so called planetesimals.’

Scientists refer to these very late building blocks of the Earth, which were delivered by these collisions, as the ‘late veneer’. If ruthenium was added during this stage, it is distributed and well mixed into Earth’s mantle by now. The old Archean mantle relics in Greenland, on the other hand, have still preserved Earth’s pristine composition.

‘The up to 3.8 billion-year-old rocks from Greenland are the oldest preserved mantle rocks. They allow us a glimpse into the early history of the Earth as if through a window’, Fischer-Gödde said. Interestingly, Earth’s oldest mantle is openly accessible in surface outcrops in southwest Greenland, allowing the geologists to easily collect rock samples.

The pristine ruthenium preserved in the old mantle rocks most likely originates from the inner part of the solar system, the two Cologne-based geologists report. It is presumably the same material that – for the most part – also formed Mercury and Venus. The reference values for the asteroidal ruthenium were previously obtained from meteorites found on Earth.

‘Our findings suggest that water and other volatile elements such as carbon and nitrogen did indeed arrive on Earth very late, during the “late veneer” phase’, Fischer-Gödde concluded. This result is surprising because the scientific community had previously assumed that water-bearing planetary building blocks were already delivered to Earth during the early stages of its formation.

The scientists are planning further field trips to India and Greenland to investigate more rock samples. Their work is being supported by the German Research Foundation’s Priority Programme 1833 ‘Building a Habitable Earth’, which is coordinated in Cologne, as well as Professor Münker’s ERC grant ‘Infant Earth’ by the European Union.